My Issues With Outlook for iOS 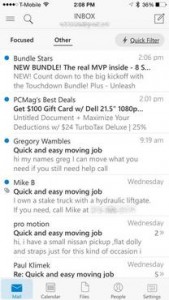 I just downloaded and played with Outlook for iOS. I know Microsoft has promised to continue iterating quickly, but in my opinion right now the app is just too crippled to replace the native iOS mail and calendar apps. (Also, there is apparently a huge security flaw in it.) From a usability point of view, here are my problems:

Hopefully Microsoft will improve it because I want to like it, but for now, unfortunately, it’s too problematic.