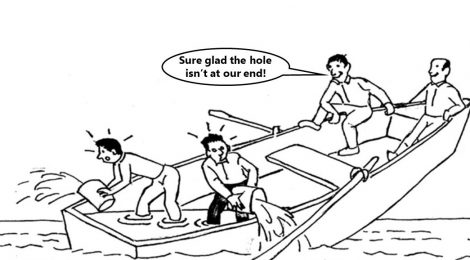 In one of the many great lines in the detective novel The Big Sleep, Raymond Chandler writes, “To say goodbye is to die a little.” If saying goodbye to what you know is dying (even a little), no wonder people avoid it at all costs. Change is brutal. It triggers psychological issues ranging from power and control to loss, grief, and bereavement.

As your business adapts to change and develops new strategies, how do you motivate your team not only to accept these changes but also to drive them forward proactively? People need to feel empowered and nurtured so they take ownership and that feeling of dying a little at a goodbye is minimized. There are three critical areas that managers need to address:

Spend time with your employees to determine what truly motivates them, and adjust the work situation if possible. For example, some may prefer to work remotely for family reasons, while others want a higher title, and still others are mostly focused on earning as much compensation as possible. Hold skip-level meetings to get direct access to critical information from people who are below your direct reports in the organizational hierarchy. It’s amazing how much information you can glean when it’s not filtered through the people who have a vested interest in your approval of them.

Here’s one idea that worked for me. I created a website with a digital suggestion box that was truly anonymous. I received lots of different feedback from people at all levels of the company. Over time, I could see trends that developed in people’s concerns, which allowed me to get a good handle on what was happening and respond. I made sure that at every all-hands meeting (which I held once per month), I responded to every single suggestion that had been submitted since the previous all-hands.

In addition to listening carefully, you also have to refine how you communicate your messages to the team:

There’s the wonderful old quote from Robert Frost that says, “By working faithfully eight hours a day, you may eventually get to be boss and work twelve hours a day.” Unfortunately, today, both managers and employees are often expected to work twelve (or more) hours per day. However, I know I perform significantly better when I get adequate sleep and a break from work, and my teams do too. Facebook co-founder Dustin Moskovitz recently wrote a candid post detailing his regret at spending too many hours at the social network’s offices and offered compelling proof that “beyond ~40–50 hours per week, the marginal returns from additional work decrease rapidly and quickly become negative.” Similarly, the Harvard Business Review published a study entitled “The Research Is Clear: Long Hours Backfire for People and for Companies.” They explained how working more hours doesn’t actually result in more output but does result in significantly more health problems (which adds to a company’s insurance costs) and leads to more mistakes. Counter-intuitively, limiting working hours actually leads to greater and higher-quality productivity.

In my experience, if you set a ceiling, it becomes a floor. As a very basic example, let’s take travel and entertainment expenses. If you cap them at a certain amount per day, you can be sure people will spend right up to that amount to make sure they squeeze every dollar out of the company they can. Indeed, in one specific instance, when I started at one of the companies I ran, there was a strict policy of a $30 limit per meal while traveling. Not even $90 per day, but $30 per meal. The unwritten message to employees was that the company didn’t trust them not to overspend and take advantage.

I decided to try an experiment and changed the policy to unlimited T&E. I expressly told the staff the reason for the change was that I wanted to treat them like responsible adults, and that I expected the respect I was showing them would be reciprocated.

Over the course of the first year under the new, unlimited policy, our T&E expenses actually dropped 15% from the previous year when the cap was in place. People felt more of a sense of ownership and were more conscious of how their actions affected the whole company. They felt respected. (There were, of course, a few people who took advantage of the policy, but after I sat down with them and explained that they were ruining it for everyone and I needed to be able to trust them, they curbed their spending fairly quickly.)

Another example came when I changed the time-off policy at one of the companies I ran to give everyone unlimited vacation and sick days. This not only raised morale by making employees feel like they had more control over their lives, but it also actually reduced the number of vacation days people ultimately took. It also saved the company money since we didn’t have to pay out unused vacation days when people left. Truly a win-win.

There are two major elements at work here: First, these policies are driven in part by game theory/prisoner’s dilemma psychology, where — in a very basic sense — people will usually bond together for the most positive outcome for everyone if you explicitly show them the benefits. The other key component is removing fear. People were made to feel afraid of going over the caps management had set on spending or on time off, so they reacted angrily by using as much as they possibly could. By showing them trust, employees felt more comfortable and more in control, and without the specter of a powerful guard in place, they were freer to act with mutual respect.

Treating people this way isn’t just the right thing to do; it makes good financial sense for everyone. There is an economics of trust.