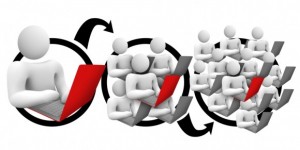 Much has been written lately about so-called “viral” content creators. The shining example is BuzzFeed, which announced this morning that the site reached an astonishing record 130 million monthly unique visitors in November, according to their internal Google Analytics metrics. Much of BuzzFeed’s growth was driven by changes in Facebook’s news feed algorithm that put more of a focus on “higher quality content,” i.e., Facebook has decided to increase the frequency and number of referrals to external content sites it considers relevant and thereby drive more traffic to those sites than it had before.

Business Insider also recently highlighted a number of other sites’ “magical, social recipe” and how they’re garnering a substantial amount of traffic from social networks, especially Facebook. Additionally, Pando Daily weighed in on this tactic, stating that “viral content is going to be a terrible business model.”

However, these characterizations miss the point. For any content provider, from traditional media brands like Time.com to digital-only brands like CollegeHumor to “viral” content brands like Upworthy, using social networks to promote content and try to make sure that it becomes viral isn’t a strategy unto itself; it’s now a critical and natural part of the content creation and marketing process. As more traditional digital marketing tactics like SEO become more difficult with changes to Google’s algorithm like Hummingbird, and email’s efficacy — while still exceedingly powerful — begins to wane slightly with younger demographics, using “viral” or “social” methods to promote virtually any type of content is no longer optional.

These new content creators may simply be better currently than others at harnessing the power of social networks to drive awareness and sharing of their content. But to characterize the content itself as “viral” is backwards. All content has the potential to be viral; making sure that it has the best chance to be shared is up to smart editors and marketers at every content creator.